The real meaning of “frozen” salaries in law firms

On Tuesday 1st May an article caught my eye on the front page of daily London paper City A.M.  With a heading of “Legal firms hit by fresh downturn” the subtitle read “Redundancies and pay freezes return to the sector as deals dry up”. Naturally (being my specialism) I read on. Delving further into the article, it noted the recent announcements of redundancies at Herbert Smith, “anaemic” pay-rises at Allen & Overy and “pay freezes” at Slaughter and May. Yes, these announcements are correct in their own right, but the following sentence in particular made me realise that, outside of legal circles, there is a misunderstanding about the nature of lawyers pay: “Allen & Overy……….announced associate salary increases of less than one per cent – well below the average across the private sector.”

In all likelihood, if you are reading this, you are probably a lawyer, or at the very least somehow employed within the legal industry and so will be familiar with the lockstep model of remuneration. But to those who aren’t I shall summarise a typical timescale of salary increases by a qualified lawyer in a City firm (borrowing Allen & Overy’s figures for the purpose of illustration). Of course the system varies when you move away from commercial law, but certainly in the case of this article (and most others that make the headlines) we are talking about City law.

September 2012 - Our newly qualified lawyer has now become 1 year qualified and therefore moves into the next pay band. His or her salary rises to £68,500. A further increase of 11.3%, and an overall increase since the previous September of 12.3%.

It doesn’t take a mathematical genius to work out that’s substantially more than average across the private sector and pretty decent even when you take into account inflation.

The pattern repeats itself  for all levels of qualified lawyers within the lockstep model. For example, using the same bandings, a lawyer who become 1 year qualified last September, will (by September 2012) have seen their salary increase from £68,000 to £74,500 – that’s 9.6% in total, even though the actual band for a 1 year qualified only increased by 0.7%. More impressive is a 2pqe lawyer going on 3pqe: their salary will increase from £74,500 last September to £86,000 in September 2012 – a whopping 16.2% increase.

There has only been once occasion in recent history where the lockstep model has not adhered to this pattern – in 2009 when salaries were out and out frozen, meaning from one September to the next, an individual’s take home pay did not increase and the newly qualified salary dropped from c. £65,000 to £60,000. 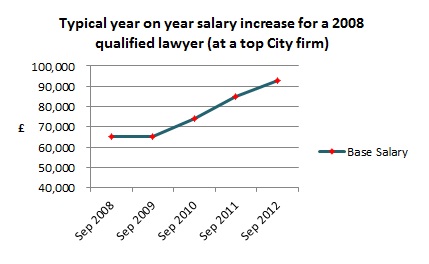 There is of course the (entirely legitimate) argument that as a lawyer becomes more qualified, their position changes (including their level of responsibility) and therefore a higher salary is justified (as discussed on the ever popular Roll On Friday website). That in itself isn’t in dispute, but surely the same could be said for many workers employed within the private sector.  The key point however, is which ever way you look at it, the headlines of “frozen salaries” or “well below the average” increases are a misrepresentation of the current plight of the modern City lawyer.