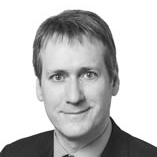 Scott originally practised as a Barrister at Goldsmith Chambers in London, having been called to the Bar in 1997. Prior to founding Edwards Gibson, he was a Director and operation head of the London office of a major international legal recruitment consultancy. His extensive experience of recruiting senior level candidates extends to both private practice and in-house and includes equity partner and team moves, domestic and international law firm mergers and global heads of legal in investment banks and financial services organisations.

Scott has contributed to legal text books on the business of law, written published articles and authored reports on both law firm and in-house recruitment matters which have been referenced in the national press including: the Financial Times, The Times and The Telegraph as well as official Law Society documents. Scott is frequently asked to present at Law Society sanctioned continuing professional development (CPD) symposiums and is a regularly invited speaker at industry events.