The In-House Triumph over Law Firms - A Pyrrhic victory?

A version of this article was first published in Legal Business September 2013 (Issue 237).

Click Here to view a pdf of this article.

In the decade prior to the collapse of Lehman, an excess of work masked the corrosive effect to law firms from competition with increasingly sophisticated and growing in-house legal departments (C&I teams). The economic downturn, post-Lehman, has exposed significant structural challenges to overstaffed law firms which have been ruthlessly exploited by C&I to decisively shift the balance of power in its favour.

Nevertheless, the triumph of in-house, measured by its rapid growth and ability to wrest increasingly complex work from law firms whilst simultaneously squeezing them on rates , may prove to be short lived. Over time, the dramatic changes in the staffing and provision of legal services, themselves largely driven by C&I, will create an environment as pernicious to in-house lawyers as to their law firm cousins.

Parasitic symbiosis – the rise of in-house

Behind the talk of close working relationships, law firms view C&I as essentially parasitic. Whilst it is true that C&I teams are responsible for providing life-giving work they also suck out hundreds of millions, perhaps billions, of pounds per annum from law firm revenue streams. Moreover, because nearly 90% of in-housers originate from private practice, and historically fewer than 3% of solicitors train in C&I, law firms have, through their expensive training programs, unwittingly assisted in their own relative diminution.

The growth of in-house has been dramatic. Since 2000, the number of practising solicitors working in C&I has risen 183%. In 2012, whilst the number of lawyers in law firms shrank, C&I teams grew more than 5%. As with absolute numbers so too with proportions: making allowances for a technical anomaly in 2012 (arising from the Law Society essentially double counting un-employed solicitors), between 2000 and 2012 the proportion of lawyers in C&I grew by 90% with a corresponding fall of 10% in private practice. 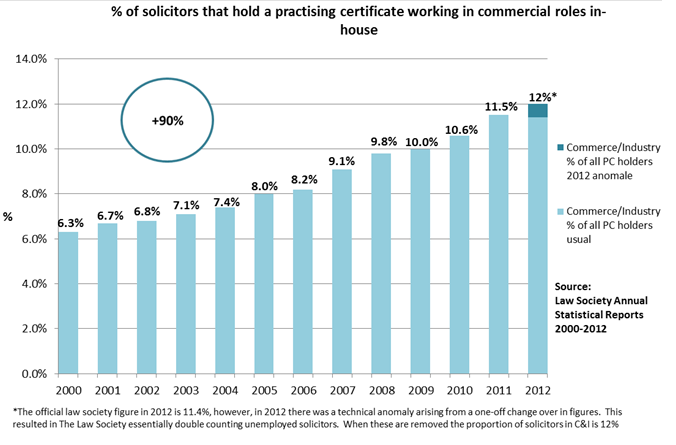 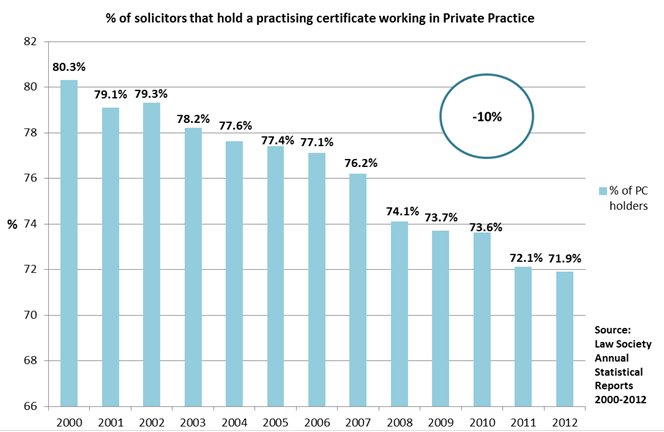 The nadir for law firms

The continued slump in premium work has made it hard for firms to counter the imposition of these detrimental in-house led innovations. To remain competitive relative to C&I, and other legal service providers, law firms have had to streamline themselves through the use of innovative IT programs combined with outsourcing, near-shoring and attendant drastic reductions in full-time fee earning and non-fee earning staff. Since 2009, top 25 firms have seen average lawyer numbers shrink more than 10% in the UK and at the senior end, official and un-official, redundancy programs remain an on-going feature of the market.

The increasing objection by many in-house departments to subsidise law firm training programs by paying for trainees, or even newly qualified lawyers, to work on their files, has contributed overwhelmingly to a dramatic 23% reduction (since 2008) in the number of training contracts. A situation, following announcements by a number of City firms re 2013/14 trainee intakes, likely to deteriorate further. 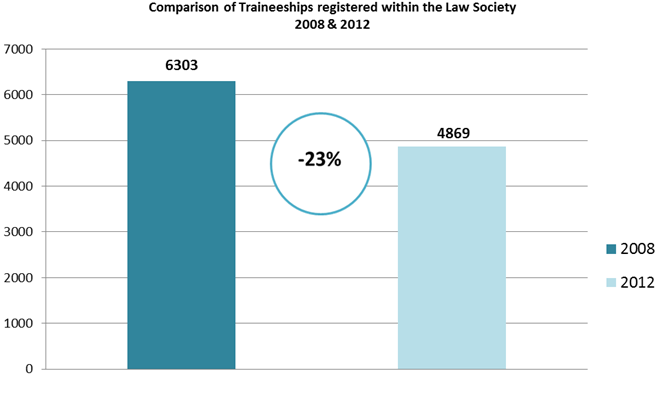 Rolling law firm redundancies have led to a sharp rise in the number and quality of lawyers willing to work as contractors. Both law firms and C&I have benefited from this deep pool of constantly replenished, flexible, inexpensive labour. For C&I, this has been a virtuous circle - law firm redundancies, caused in large part by fierce competition from in-house, have enabled General Counsel (GC’s) to obtain top quality law firm specialists at knock-down prices who go on to further reduce the need to utilise law firms. 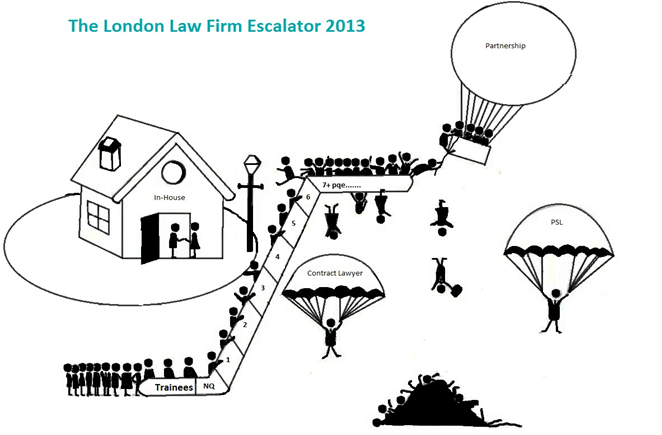 Notwithstanding the recent proliferation of niche law firms spun out from larger City players and the unabated arrival of small offshoots of US firms in London, the “more for less” working practices forced on firms by C&I are likely irreversible and will continue to drive consolidation, and destruction, of a number of full-service law firms. Some, including noted legal economist and futurist Richard Susskind in his book Tomorrow’s Lawyers, see the changes as nothing short of apocalyptic for mid-market firms with mergers leaving far fewer full service players than today. At the top end he suggests there will be a small cadre of global firms, fewer than 20 worldwide, undertaking truly complex, multijurisdictional or “bet the company” matters – i.e. the premium work for which C&I cannot compete.

Although in-house lawyers would doubtless like to be viewed by their business as indispensable consigliore, as far as company FD’s are concerned, the growth (and existence) of C&I teams is predicated on cost arbitrage over law firms. For GC’s the recent squeezing of law firm suppliers, together with a plentitude of jettisoned law firm lawyers, has eased recruitment and retention issues within established C&I departments and enabled them to grow their teams and specialist coverage with little or no increase in departmental budgets. In purely economic terms, supply & demand dynamics have reduced the cost of lawyers. However, as the number of lawyers (and law firms) shrink, C&I may face its own Götterdämmerung.

In the medium term, C&I teams will find recruitment (and retention) far more challenging than today. The sharp reduction in trainees will by itself significantly constrict the supply of lawyers, and over the next 5 years the current surfeit of talented, highly flexible, senior lawyers being jettisoned onto the market by diminishing law firms will work itself through. Then, even with only a moderate improvement in the economy, a tighter labour supply will, as in the past, result in very sharp increases in law firm salaries which C&I teams, as cost centres, will be unable to match.

For GC’s widening wage differentials may not seem unduly worrying – C&I wages have usually traded at a 10-20% discount to law firms. However, since the birth of the modern in-house lawyer in the 1990’s the profession, fuelled by the need for law firms to retain pyramid-shaped teams, has never before contracted. With much wider salary differentials and harder working C&I teams, many of the assumptions around the attractiveness of in-house over, what may become, a much smaller cadre of more leanly staffed law firms, may no longer apply.

One solution is for C&I to train more of its own lawyers, however, this is unlikely; training is expensive, time-consuming and requires long-term investment - something few GC’s can justify, particularly as most consider law firm practice an essential ingredient in a good in-house lawyer.

If top law firms consolidate as dramatically as Susskind suggests, it is likely that less inter-firm competition will result in a relative increase in the cost of premium legal services. But GC’s, priced out of recruiting top law firm talent, may still be forced to cede much their hard-won specialist work back to these firms (particularly as re-sized firms will be less able, or willing, to oblige them as now with a flow of grace-and-favour secondees). For mid-market or routine matters, those firms which survive consolidation will have evolved, through technology and Darwinian natural selection, to be a far greater competitive threat to C&I. Some, perhaps linked to accountancy or legal publishing companies as Alternative Business Structures, may even offer services to corporates which, working directly with project managers and procurement teams, cut out GC’s altogether.

For mid-market matters it is forcefully argued by Susskind that rapidly advancing IT will enable much legal work, currently classified as bespoke, to be commoditised and undertaken by non-lawyer personnel, either in-house or by external providers, at a fraction of its current cost. If so the number of lawyers in C&I will plummet. However, even if this interpretation is correct (and it is perhaps not as inexorable as asserted) technological advances are unlikely to arrive in time to solve the medium term human resource, and coverage, issues arising from the looming contraction in supply from their traditional pool of private practice talent.

Law firm partners on the pointy end of panel reviews tend to forget that C&I teams are generally under similarly intense pressure to provide “more for less” to their businesses. Flat or reduced in-house legal budgets have often meant overworked GC’s have had little choice but to squeeze law firm suppliers which, in a vapid economy, are shrinking to fit. But by opening this Pandora’s Box, in particular by working with in-house procurement and non-legal project managers to achieve short term dominance over law firms, GC’s have unwittingly created a recruitment and coverage time bomb for C&I whilst simultaneously enabling new forms of competition to develop which may well ultimately threaten both C&I and even the role of the GC.  By sowing the wind, in-house will reap the whirlwind.